The climate crisis leaders' debate: what did we learn? 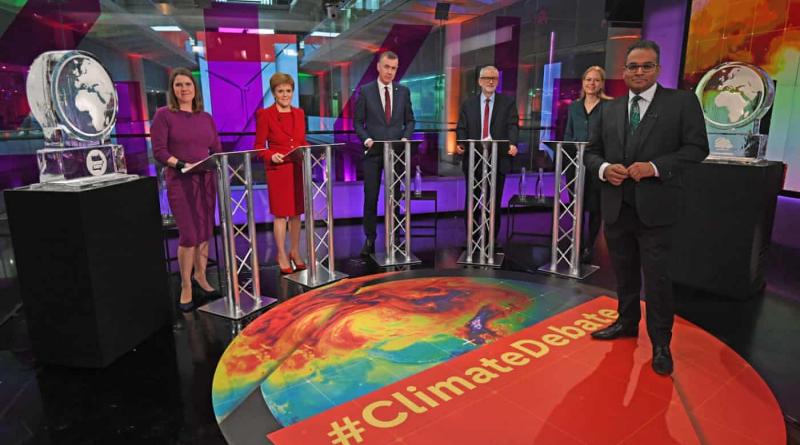 How did the leaders of the main parties, minus Boris Johnson, address the biggest issue of our times? Four writers respond

Zoe Williams:It showed the insufficiency of politics in the face of this disaster

The climate change debate left me mournful: it wasn’t the montage of environmental emergency that opened it, though if I never heard the sound of a koala in pain again, that would be a-ok. It wasn’t any of the individual leaders, who all put their best foot forward, though weren’t without their less appealing moments.

It was the magnificent insufficiency of politics, all its conventions, all its rubric, in the face of this disaster. There is nothing like watching five people who fundamentally agree – who all believe the science, who all want to see children grow up into a liveable world, who all see this as the most pressing challenge humanity could face – try to suck endless arguments out of who believes it the most, and whose track record shows them in the best light, that makes you doubt our collective ability to fix this, or indeed, anything.

Green co-leader Sian Berry was superb at points, but there was this lacuna where her honest opinion should have been. Maybe never before or after, but at this point in time, a serious Green would be asking people to stop a Conservative majority – which would not, even with Swinsonian delusion, involve voting Green, except in two or three places in the country.

Jeremy Corbyn momentarily rehumanised himself by admitting that he was too miserable to turn the central heating on, but was forced by the invisible hand of political normalcy to attack the SNP’s Nicola Sturgeon.

Adam Price asserted Plaid Cymru’s determination to halt the third runway in Heathrow and HS2, which realistically they could only ever do as handmaidens to a Labour government, which will involve cooperating, so why not start cooperating now?

Sturgeon paraded her green credentials as the party of government in Scotland, but it was ridiculous; of course she’s planted 22 million trees and what’s everyone else done? She’s in government!

Lib Dem leader Jo Swinson made her opening statement about Brexit, which far from sounding like a gestalt answer to all British politics, made her look as though she could only see any issue for its political advantage.

They all say what we need is systems change, but their adversarial parade that stands in for discussion is one of the systems that needs to change first.

• Zoe Williams is a Guardian columnist

Alice Bell: No one seemed to grasp the challenge of decarbonising heat

Overall, it was a reasonably positive hour of political telly. There was very little point-scoring, and time to get into some juicy details without wasting precious minutes just shouting Brexit soundbites at each other.

Still, the danger was that it would be boring. Do these parties have anything very much to argue about when it comes climate and nature? It turns out they did.

Labour and the SNP both came in for criticism over airport expansion. Everyone wriggled a bit when it came to questions about food, seemingly scared of upsetting farmers and meat-eaters, and no one really seemed to grasp the challenge of decarbonising heat, or was willing to admit how disruptive it might to our homes or how much it might cost, despite some excellent probing from Krishnan Guru-Murthy. Plus there was the predictable spat over whether 2030, 2045 or 2050 was a good target for net zero carbon emissions (when arguably the important thing is what we do now).

The other leaders ganged up on Labour a bit over nuclear. But the party that really needed more attention was the Conservatives. In fact it took nearly half an hour before anyone mentioned them. And as a result, their record wasn’t examined, and it needed to be.

Ultimately, if Johnson wants to lead us through the vital next five years, we need to publicly scrutinise what he plans to do. In many ways the ice sculptures that stood in for the Tory and Brexit party leaders were genius, and I hope the image of them dripping haunts those who didn’t turn up. But I worry they left Johnson in particular off the hook. Channel 4 might have been better served filling his empty chair with a fact-checkers tasked with examining the Conservative record on each of the topics raised instead.

John Vidal: There was surprising harmony and politeness

Hours after the European parliament declared a climate emergency, a day after scientists warned that we are close to irreversible climate disaster, and a week before the start of the most important UN climate meeting since 2015, the man most likely to be prime minister ducked out of a debate about what most people understand is the most important issue of the age.

It didn’t matter. His place was taken by a melting ice cube and his non-existence was treated like an embarrassing smell coming off the Arctic permafrost.

Without Tory bluster, and with sensible questions from Krishnan Guru-Murthy, there was surprising harmony and politeness, with the five leaders often competing to agree with each other, with cries of “absolutely”, and “of course” – the kind you get from people who have just woken to the fact that buses, soil, trees and lagging is really, really interesting and important and that the fate of the world has been totally ignored for too long.

Yes, there was old thinking. No one committed to ruling out new roads or airport expansions. Jo Swinson seemed astonished that houses in Yorkshire could be made warm in November without heating. Corbyn still warmed to nuclear.

But there was much more of the new. Adam Price of Plaid Cyrmu promised to turn to reusable nappies and Corbyn promised to plant 2bn trees in 10 years.

But the overriding impression was of leaders with a modicum of vision of a new industrial revolution, with new thinking about the land and a new agenda to push.

“Is any of this real?”, cried Krishnan Guru-Murthy. “It’s progress” said Sian Berry, a Green co-leader, delighted to see her party’s ideas finally in the mainstream.

But the ice cube had by then probably melted.

Ellie Mae O’Hagan: The leaders should have joined together to condemn the absence of Boris Johnson

When writing snap reactions to political debates, one is usually expected to pick a winner. But I honestly couldn’t tell you which leader won the climate debate as it was so esoteric and interminably boring I found it hard to focus. It was commendable of Channel 4 to host a debate solely on the most important issue facing humanity, but the dry and complicated hour of television that resulted is emblematic of the problem with the mainstream climate debate as a whole.

All too often, climate is talked about in terms of technology and policy, when in fact it is an issue of politics. The only reason we’re in absolutely dire straits now is because the people who had the power to do something sooner benefitted from keeping things exactly as they were. The debate failed to mention fossil fuel companies and the great campaigns of lobbying and misinformation they engage in. It failed to mention climate denial, and the fact that this is overwhelmingly a rightwing pursuit. The debate focused on minutiae to the point of absurdity. “My kids have never seen a hedgehog,” exclaimed Jo Swinson at one point.

As for the leaders themselves, it was frustrating to see Jeremy Corbyn be intermittently denounced when the reality is that this election is our last hope to transition to a green economy, and he is the only person that can do it. The other leaders on the panel may not like that, indeed some of the audience may not either, but it remains a fact. The leaders should have joined together to repeatedly condemn the absence of Boris Johnson, who inexplicably sent his dad to do the debate instead, like some kind of chastened errant schoolboy.

The real winners were climate activists, whose hard work and dedication created the demand for the debate in the first place. The political mainstream better learn how to talk about climate with the same clear-eyed urgency as them, for all our sakes.

Climate and Energy Experts Debate How to Respond to a Warming World.

Climate change will be an issue for most voters in 2020 — CBS News poll.