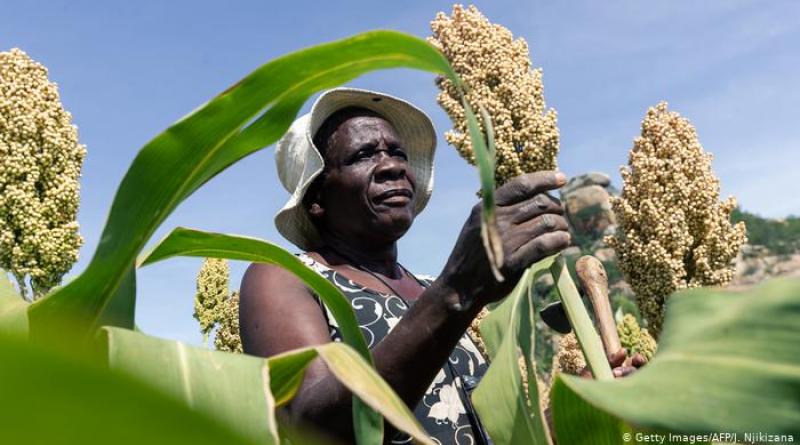 The Alliance for a Green Revolution in Africa (AGRA) is a favorite cause among Western donors — including Germany. But a study finds that the work of the organization is actually counterproductive.

The Alliance for a Green Revolution in Africa (AGRA) seems to enjoy boasting with numbers and statistics: Its website is full of figures, highlighting some of the organization's self-declared milestones such as the 550 million euros ($650 million) it has invested across the continent, the 119 seed companies AGRA has founded, the 700 scientific papers it has financed, and the almost 23 million small farmers the organization has reportedly impacted.

But there is another number, which now is sorely missing on AGRA's website; on older versions of the website stored on Internet archives it can, however, still be found: AGRA had set itself the ambitious objective of doubling the earnings of 20 million small farmers by 2020 while halving food shortages in 20 African countries. This is what the organization had pledged to do when it was founded in 2006.

Some critics say that this is not the only shortcoming they have witnessed in terms of AGRA delivering on its promises. Zambian agricultural expert Mutinta Nketani says that when an organization like AGRA "fails to achieve the goals it had set itself, all alarm bells should go off — not only amid civil society, but also amid AGRA itself as well as its donors."

Nketani is one of the authors of a current review published by several German and African development organizations together with the left-leaning Rosa Luxemburg Foundation. The figures highlighted in the report do not paint AGRA in a good light: The number of starving people in AGRA's 13 partner countries across Africa is said not to have fallen at all but is reported to rather have risen — by almost a third.

Meanwhile, agricultural output is purported to have risen at a slower rate than before ever since AGRA's involvement began in eight of those countries. In two of those countries, it even decreased over that period, according to the analysis.

AGRA says it mainly supports small farmers. The Nairobi-based organization says it has invested around 500 million euros ($590 million) to this end to date, training small farmers in how to best employ certain resources. AGRA President Agnes Kalibata said in a DW interview in 2017 that "farmers need access to technology, quality seeds and fertilizer.”

But the researchers behind the current analysis write that farmers in Zambia, for example, were subsequently forced to take out loans to buy such fertilizer and seeds, adding that when their anticipated proceeds failed to materialize, they were no longer able to repay their debts.

Much like the farmers themselves, Zambia's government is also burdened by a huge pile of debt amid this agricultural crisis. Having also purchased seeds and fertilizer at high market prices, the government started to distribute them to small farmers. According to the current evaluation, the Zambian government is currently sitting on outstanding invoices to the tune of $106 million (89 million euros).

Similar examples are reported to have occurred in other African countries.

"In most cases, it's the interests of private companies, such as seed and fertilizer producers. And in Zambia, those are mostly multinational corporations."

The study further highlights that an increasing amount of soil in the country is now becoming acidic due to the excessive use of fertilizers. With AGRA concentrating on monocultures such as corn, local plants are likely to eventually vanish altogether.

The accusations against AGRA are particularly serious as the organization is a favorite among Western donors. Dirk Schattschneider, representative of the special initiative "OneWorld No Hunger” at Germany's Federal Ministry for Economic Cooperation and Development (BMZ), says that AGRA "is highly respected by many African governments, the African Union and civil society.”

However, the initiative was founded in 2006 by two US organizations: The Gates Foundation and the Rockefeller Foundation.

The Gates Foundation alone has so far supported AGRA with the equivalent of 498 million euros ($589 million). AGRA refers to itself as an African initiative nowadays; however, both those US-American foundations remain its largest donors to date.

Dr. Agnes Kalibata, AGRA's President, has built up a strong international network and knows how to go about getting people to listen to her.

In 2017, she co-authored a declaration at an international nutrition conference hosted by Germany on the occasion of its G20 presidency — later in the same year, AGRA and the federal German government agreed on embarking on a cooperation that has proven to be valuable for both parties: In 2019, the annual meeting of the AGRA board of directors took place in Berlin.

Kalibata's star continues to rise with each major global cooperation projects being signed off; currently, she is preparing a World Food Summit next year as Special Envoy of UN Secretary General Antonio Guterres. Reputation Poll International even ranked Kalibata as among the "100 Most Reputable Africans of 2020.”

But AGRA's growing influence is also the result of an offensive public relations campaign: AGRA has always been open to responding to media interviews, inviting journalists to pen guest commentaries, and paying their travel expenses to cover AGRA events. It is only now, in the midst of the mounting allegations against AGRA, that the organization for the first time failed to answer an interview request by Deutsche Welle for days.

In the end, AGRA's head of strategy, Andrew Cox, sent a written reply, saying: "We reject the criticism arising of this 'analysis', which was not conducted in a transparent manner. AGRA was not afforded any opportunity to comment on these ‘results.' We therefore find it impossible to comment any further.”

AGRA meanwhile also announced that it would evaluate its practices of recent years by the end of 2021 — without making any changes to its basic approach for the moment: "AGRA has demonstrated that household incomes rise sharply whenever farmers have access to modern seeds and technology,” Cox added.

Germany to continue cooperation — for now

The BMZ meanwhile says it intends to continue its cooperation with the organization: Since 2017, the BMZ has been funding two projects in Burkina Faso and Ghana at a cost of 10 million euros. According to BMZ representative Schattschneider, their current cooperation would be fully completed as planned, adding that AGRA may have set goals that were too ambitious ambitious to achieve when it first was founded.

The BMZ added that it would, however, take note of the results of the current analysis while deferring to external factors that might have also influenced the negative results of the study: "First and foremost, there was the world financial crisis, which had a major impact on the agricultural and farming markets, as well as various natural disasters and a number of other factors that may have played a role," Schattschneider said.

"In the future, AGRA must provide better validation of its impact data from its activities. Secondly, AGRA projects must be given more room for agro-ecological approaches in the future,” Schattschneider argued, saying that these aspects were already being discussed with AGRA.

Mutinta Nketani might meanwhile be rather disappointed to hear that; she wants to witness a radical sea change on how investors deal with African agriculture: "They must support agricultural projects based on local techniques and experience,” she said in an interview, adding that every without AGRA's help, African farmers already know how to produce seeds and organic fertilizers while protecting the environment.

Big farmers use climate-resistant seeds. Most small farmers can’t get them.