How States Will Continue to Drive Climate Action in 2020. 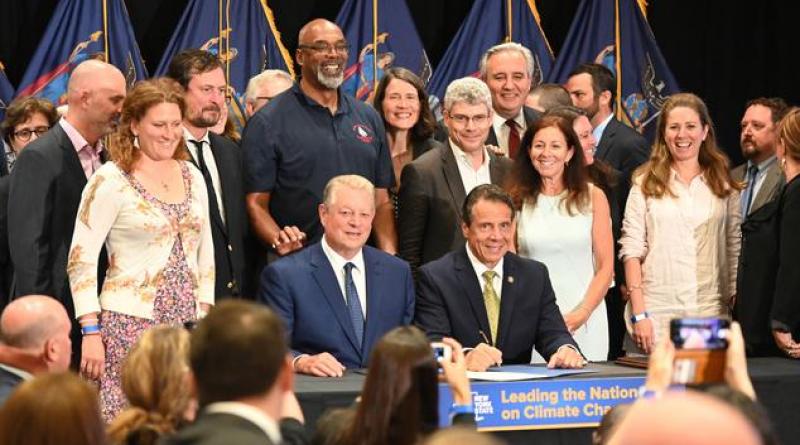 The “State of the States”: How State and Local Action Drove Climate Action in 2019 – and What to Watch For in 2020

Will the U.S. make climate progress in 2020? If last year is any indication, the answer will emerge from states and cities where progress in tackling carbon pollution is accelerating, even in the face of the pro-polluter Trump administration’s efforts to turn back the clock.

2019 saw continued state and local level progress on energy efficiency, renewable energy, clean cars and electric vehicles, despite the Trump administration’s efforts to roll back climate and clean energy policies, curb renewables, and bring back coal. The U.S. now hosts 100 gigawatts (GW) of land-based wind, and the federal government predicts that a record breaking 14.3 GW of wind will come online in 2020. And offshore wind power is poised to become a major U.S. zero-carbon energy source. The U.S. has now installed 71.3 GW of solar energy, enough to power 13.5 million homes. Looking forward, total installed U.S. solar capacity is expected to more than double over the next five years.

Despite significant state and local climate progress, this is hardly a moment for congratulations or complacency.

The U.S. is not on track to avert the worst impacts of climate. The growth of gas and gas infrastructure threatens the clean energy progress that we’ve made, with U.S. gas production reaching new monthly record highs each month in 2019.

We desperately need U.S. climate and clean energy progress to come faster, and we need strong federal climate action to make that happen. But state and local progress can keep us headed in the right direction, building the much broader support for climate action that we need to win, including solutions that ensure that everyone has access to clean energy and that create quality jobs, and creating replicable models for when the federal government is willing to act on climate again.

On state progress, New York and California led the way on the two coasts.

After years of grassroots advocacy by NY Renews, a coalition of environmental justice and frontline communities, New York set a new benchmark for climate ambition with the passage of the New York Climate Leadership and Community Protection Act (CLCPA), a groundbreaking law—hailed by The New York Times as the most ambitious climate legislation in the world—that puts the state on a path to reaching net zero greenhouse gas emissions and includes groundbreaking equity and climate justice provisions. In 2020, New York must go deep on implementing the CLCPA and focus with laser-like intensityon smart siting of renewable energy projects and on getting projects built.

California, buffeted by climate impacts like deadly wildfires, drought, and power outages, continued its long record of climate leadership, fighting hard against Trump administration efforts to limit its long-held authority to set stronger state vehicle emission and equipment efficiency standards. California adopted the first-ever state building code requiring single-family homes and low-rise buildings to be more efficient and to install rooftop solar. Many California cities, led by San Jose and Berkeley, also initiated what may become a national trend by requiring new residential and low-rise buildings to be all-electric. And strong new California state lighting standards went into effect on January 1, even as the Trump administration attempts to roll back federal lighting standards.

More and More States Are Acting on Climate Across the U.S.

Every state is facing consequences from climate change, and in 2019, the real news is that, thanks in large part to the new crop of progressive climate-champion governors elected in the 2018 midterm elections, more and more states made strong commitmentsto boost clean energy and slash climate pollution.

New Mexico enacted the bold Energy Transition Act which will double renewable energy use in the state by 2025, requiring 50 percent renewable energy by 2030 and 100 percent carbon-free electricity generation by 2045. The new law also puts in place a new financial tool called securitization to save customers money while also accelerating the phaseout of coal power plants and creating transition funds to assist affected communities and workers.

And Washington State, among other successes, passed a 100 percent clean energy standard, joining a growing number of other states with similar goals.

In a major Western climate setback, Oregon, despite pro-environment state political leadership, failed to move forward with a carbon cap and invest bill strongly supported by Governor Kate Brown when Republican lawmakers fled the state capital rather than voting on the bill, preventing the quorum that was necessary to hold the vote. Watch for the sequel to this troubling drama in 2020, when the Oregon legislature may take up a climate bill again during its short session, with strong executive action by Governor Brown as an alternative.

In the Midwest, new pro-environment governors in Illinois, Michigan, Wisconsin, Minnesota, and Kansas took office, creating major new opportunities for climate action in the Heartland. In April, NRDC, together with LCV, Sierra Club, and the Midwest Environmental Justice Network, brought together senior climate advisors for many of these new governors for a historic Midwest Governors Climate Summit.

In Illinois, a broad-based coalition featuring both frontline communities and labor pushed for the introduction of the Clean Energy Jobs Act, a bold bill which would put the state on the path to 100 percent renewable energy by 2050, provide incentives and needed infrastructure for scaling up electric vehicles and better access to clean transportation and other distributed clean energy, expand the state's energy efficiency policies, and place a cap on carbon pollution from power plants. Importantly, the bill would ensure that the transition to clean energy in Illinois must prioritize economic opportunity for people of color, people who live in environmental justice communities, and workers affected by the transition away from fossil fuels. Passage of the Clean Energy Jobs Act in the first half of 2020 would be transformative for climate progress in the Midwest, giving Illinois Governor Pritzker and legislative leaders an opportunity to demonstrate their commitment to climate action.

Michigan Governor Gretchen Whitmer had an active year on climate and clean energy leadership. The state joined the U.S. Climate Alliance, a coalition of now-25 governors who have committed to meet their share of U.S. Paris Agreement carbon reductions. Michigan's public service commission approved the utility DTE's electric vehicle pilot, denied an unwarranted fee that would have slowed the progress of distributed generation (like rooftop solar), and approved the utility Consumers Energy's "clean and lean"

Integrated Resource Plan, which includes a commitment from the utility to be coal-free by 2040, not build new gas-fired power, and instead ramp up energy efficiency and renewables by 2030. Minnesota, which ranked among the top 10 states for energy efficiency in 2019, announced plans to pursue clean car and zero-emission vehicle standards.

Missouri introduced securitization legislation in 2019, which will kick into overdrive in 2020. That legislation will break the block of coal-fired power that hasn’t budged in the state in decades, fast-tracking their closure and making room for ambitious investments in wind and solar. On other fronts, Missouri approved the largest Missouri energy efficiency plan in state history, brought forward by the utility Ameren. Kansas City adopted a resolution committing large city buildings to 100% carbon-free power by the end of 2020 and Energy Star certification by the end of 2023, and establishing an electric vehicle procurement initiative for the city’s fleet, and the mayor of St. Louis, an American Cities Climate Challenge (ACCC) city, proposed a bold new target for climate action.

On a somber note, there was a significant setback in Ohio with the passage of HB6, a bailout for nuclear and coal power that also guts energy efficiency and renewable energy mandates in the state. The coming year will test whether Ohio can pick up the pieces on clean energy and make progress on focused initiatives such as building large-scale solar projects to create jobs in Appalachia and moving forward with building the market for electric vehicles. And we can count on Ohio cities Columbus and Cincinnati, both part of the ACCC, to continue their strong progress on climate action.

In Pennsylvania, the best climate news of the year was Governor Tom Wolf's executive order to develop regulation cutting carbon dioxide pollution from power plants, with an eye toward the state's future participation in the Regional Greenhouse Gas Initiative (RGGI), the Northeast's successful cap-and-invest program. State legislative elections in 2020 could result in accelerated climate progress in Pennsylvania if climate champion leaders take control of both houses. Philadelphia and Pittsburgh, also both ACCC cities, are also innovating on climate and clean energy. For the full picture of 2019 progress and setbacks on clean energy in Pennsylvania, read NRDC’s blogs here, here and here.

Along with Pennsylvania’s bold efforts, Virginia is poised to join RGGI by 2021. And with a new climate and clean energy majority at the capitol in Richmond, the state now has a chance to boost energy efficiency, reduce emissions, and lower its higher-than-average energy burden.

North Carolina, too, is changing course under Governor Roy Cooper's leadership,unveiling a draft energy plan that would reduce power sector emissions 60 to 70 percent below 2005 levels by 2030.

While each individual state's pivot toward clean energy and climate-smart policies counts, regional initiatives can be even more potent. In the East, the RGGI program, established more than a decade ago and now including 10 states, has played a leading role in cutting carbon pollution from power plants by almost half since its inception and keeps gettingeven stronger. Now, under the Transportation and Climate Initiative (TCI) banner, 12 states plus and Washington, D.C., are moving forward with a draft framework to upgrade the region’s transportation system to be more efficient, more affordable, and less polluting, improving quality transportation options for all. Both state coalitions are bipartisan, including governors from both parties.

In 2020, look for continued East Coast regional progress on a new source of renewable power: offshore wind. In 2016, the first U.S. offshore wind farm came online off the coast of Rhode Island, consisting of just five 6-megawatt (MW) turbines. Since then, a bipartisan group of state governors from Maine to Virginia have begun to recognize offshore wind’s clean energy and economic potential. As of the end of 2019, seven states have set goals to collectively procure nearly 27 GW of offshore wind by 2035. Once built, it will be enough to power 20 million homes. These projects will ensure low-cost, reliable electricity and good jobs across the region. But Trump administration delays in approving offshore wind projects in federal waters could slow this progress—another trend to watch for in 2020.

2019 also saw strong progress on state initiatives to phase out HFCs, which are climate “super pollutants,” after the Trump administration rolled back federal protections. HFC phaseout legislation was enacted in California, Washington, and Vermont, and we saw regulatory progress in 2019 in Maryland, Delaware, Massachusetts, and New York. Legislation is nearly completed in New Jersey, and commitments are expected to be announced in Maine and Rhode Island in 2020. These state efforts have helped to spur a promising bipartisan effort to pass federal HFC phase out legislation in Congress.

2020 will be a consequential year on many levels. Here are three variables and trends that could impact state-level climate and clean energy progress in the year to come:

New York to Approve One of the World’s Most Ambitious Climate Plans.