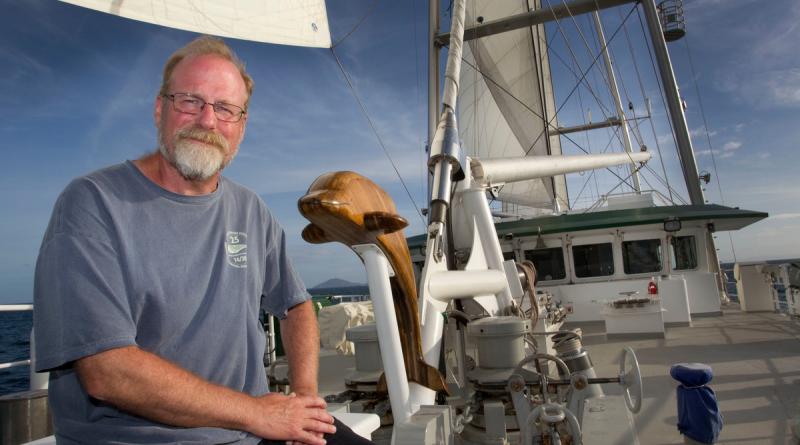 After hours, when he wasn’t a driving force in the global struggle to address the climate emergency, or taking a fledgling organisation called Greenpeace out of its tumultuous adolescence into powerhouse adulthood, he was an outstanding blues guitarist, an enviably precise writer, a proud parent of magically gifted children, a sailor, a science fiction fan, and a connoisseur of wry irony.

In his parting instructions, he pointed his wife of more than 30 years, Kelly Rigg, to Lou Gehrig’s farewell speech as a model for his obituary. It’s a short speech in which Lou says almost nothing about the bad break that will shortly take his life, but speaks about the honour he had to live the life he did, and his appreciation of having shared it with the extraordinary people he shared it with.

Steve Sawyer passed on 31 July, 2019 shortly after he was diagnosed with lung cancer. He was the Senior Policy Advisor at the Global Wind Energy Council. For over 10 years as the organisation’s General Secretary, Steve tirelessly represented the wind industry and worked to convince governments to adopt wind as the solution to growing energy demand and carbon emissions. During Steve’s tenure at the head of the Council, global wind installations grew from 74GW to 539GW and became one of the world’s most important energy sources. He contributed significantly to the development of the wind industry in places such as India, China, Brazil and South Africa. He was a prominent speaker in public and private forums, and wrote innumerable articles, blogs and position papers.

He previously served in leadership positions at Greenpeace for nearly three decades. At both the Global Wind Energy Council and at Greenpeace, Sawyer was driven by a fierce love of nature and the sea forged in his childhood in New England, which he often described as most happily spent “messing about with boats.”

He studied philosophy at Haverford College (fellow alum Dave Barry wagged that its motto was “We’ve never heard of you either”) where he was steeped in the classics. But his reading of Aldo Leopold, Rachel Carson, Edward Abbey, and Saul Alinsky pulled him toward the rising environmental movement. From Tolkien’s The Lord of the Rings he drew lifelong inspiration for seemingly hopeless causes, and the faith that a small group of principled and courageous under-dogs could, against all odds, change the world.

He was by his own admission a card-carrying hippy when a Greenpeace canvasser knocked on his door looking for a donation. Steve volunteered instead. He went door to door in the Boston area as a Greenpeace canvasser himself, before joining the Greenpeace ship Rainbow Warrior in January 1980 to campaign against the transport and discharge into the ocean of radioactive wastes.

Sawyer’s story and that of the Rainbow Warrior would be entwined throughout Greenpeace’s early days. He lent his maritime knowledge to a refit in Stonington, Maine, blasting rust and painting, and later to converting her to sail to prepare for a crossing of the Pacific Ocean. It was there that the ship took on a mercy mission from which Steve would draw a lifelong sense of pride, relocating the inhabitants of the Rongelap atoll, poisoned by fallout from US atmospheric nuclear weapons tests. Steve and the crew relocated the entire community and all their worldly belongings, whose requests for relocation had been denied by the US Government, despite rising incidences of cancer and birth defects. The event was seared into Sawyer’s heart and imagination.

It was aboard that same ship that he and the crew were celebrating his 29th birthday in New Zealand when two limpet mines, later revealed to have been planted by the French Secret Service, sent the ship to the bottom of the harbour, taking the life of photographer Fernando Pereira. It was an act of state terrorism in reaction to Greenpeace protests against nuclear weapons testing in the Pacific, a cause that Sawyer had spearheaded. The attack backfired badly, propelling the cause of the Pacific Islanders victimised by testing into the limelight, and driving massive growth at Greenpeace as donations and expressions of support poured in.

Sawyer’s handling of the aftermath, and the successful suit of the French Government for damages, further propelled his own reputation as a leader and in 1988 he was named Executive Director of Greenpeace International.

Greenpeace had some of its greatest triumphs in the years Sawyer was at the helm – from the declaration of Antarctica as off-limits to gas and oil exploration, to the Montreal Protocol limiting ozone-depleting gasses to an end to radioactive waste dumping at sea worldwide. He also led Greenpeace to begin campaigning in earnest against climate change long before most of the environmental movement understood the threat. According to insiders, his tenure marked the coming of age of an organisation that had once prided itself on its rag-tag mystic hippiedom.

In 2001 Sawyer shifted his focus exclusively to the existential threat of climate change. Through his work at Greenpeace and the Global Wind Energy Council he became a familiar figure at the annual UN climate talks and fought fiercely to awaken governments and corporations to the dangers of rising temperatures. He had a scholarly understanding of the science, an activist’s anger at inaction, and a strategist’s eye for where to apply pressure or introduce solutions.

To his colleagues, Sawyer will be remembered for the qualities of his leadership: his stubborn courage, his ability to inspire against overwhelming odds, his absence of ego, and his faith in the power of loyalty, integrity, rationality, and commitment. He was Gandalf to a rag-tag fellowship of underdogs, reminding those around him, by his own example, in the face of one existential threat after another, that we cannot choose the time that we are born to, and that our most important task is to decide what to do with the time that is given us.

He is survived by his wife Kelly, his daughter, Layla, and his son, Sam.

Steve Sawyer: "It's a struggle to the death for the future of the planet" [video]

Interview with Steve Sawyer: all you need to know about global wind energy prospects. [Video]