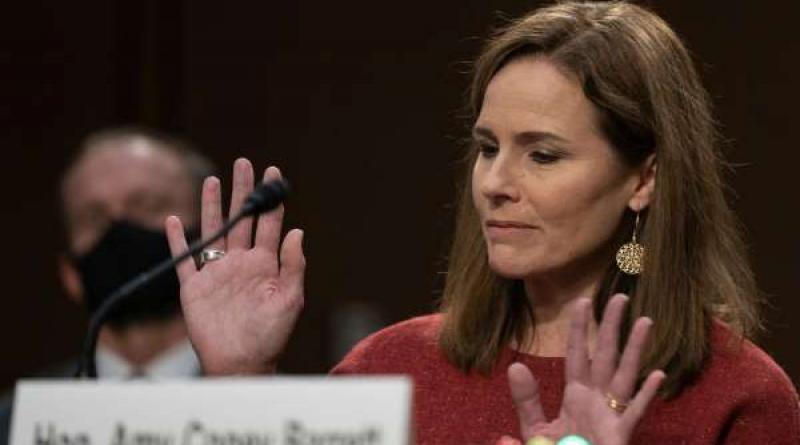 Amy Coney Barrett declined to say that climate change is real, calling it instead a “a very contentious matter of public debate” during the third day of her Supreme Court confirmation hearings.

The judge made the comment on Wednesday as she was questioned by California Senator Kamala Harris, the Democratic vice presidential nominee, and a member of the Senate Judiciary Committee.

Senator Harris asked Ms Barrett a series of questions, including whether she thought the coronavirus is infectious, whether smoking causes cancer and whether “climate change is happening and it’s threatening the air we breathe and the water we drink”.

The judge responded that she thought Covid-19 was infectious and that people could get cancer from smoking.

Some 97 per cent or more of climate scientists agree that climate-warming trends over the past century are being driven by human activities, largely the burning fossil fuels.

The Supreme court nominee doubled down on comments she made on Tuesday, where she said that she has no “firm views” on climate change because she is “not a scientist”.

Judge Barrett returned to Capitol Hill for a third day on Wednesday as senators dug into the conservative nominee’s stances on the Affordable Care Act, the landmark abortion ruling Roe v Wade, and potentially a disputed presidential election.

She expertly deflected some lines of questioning, insisting she would bring no personal agenda to the court but decide cases “as they come".

On Tuesday, Republican Senator John Kennedy, of Louisiana, pursued questions aimed at, as he put it, showing what President Trump’s nominee “thought about the world”.

“Do you have some opinions on climate change that you’ve thought about?” Mr Kennedy asked.

Judge Barrett replied: “You know, I’m certainly not a scientist.”

When asked to expand on her answer, she continued: “I mean, I’ve read things about climate change. I would not say that I have firm views on it.”

The well-worn Republican talking point of “I’m not a scientist” has allowed a host of elected officials to equivocate on the scientific consensus on climate change, despite polls that show most Americans accept the reality of the crisis and want the government to take action.

Senate majority leader Mitch McConnell,  Florida Governor Rick Scott, and former House Speaker John Boehner, all have all made similar “not a scientist” pitches when asked about the climate crisis.

Michael McKenna, a Republican energy lobbyist, previously told the New York Times that it was “the dumbest answer I’ve ever heard”.

Judge Barrett has a slim judiciary record on environmental issues, and a question on climate change did not come up after she was nominated to the US Court of Appeals for the 7th Circuit by President Trump in 2017.

The judge’s conservative views are at odds with the late Justice Ruth Bader Ginsburg, the liberal icon who she will replace. She would be Mr Trump’s third justice and her ascension is expected to tip the court 6-3 to the right.