Why the world’s third-largest economy is still betting on coal. 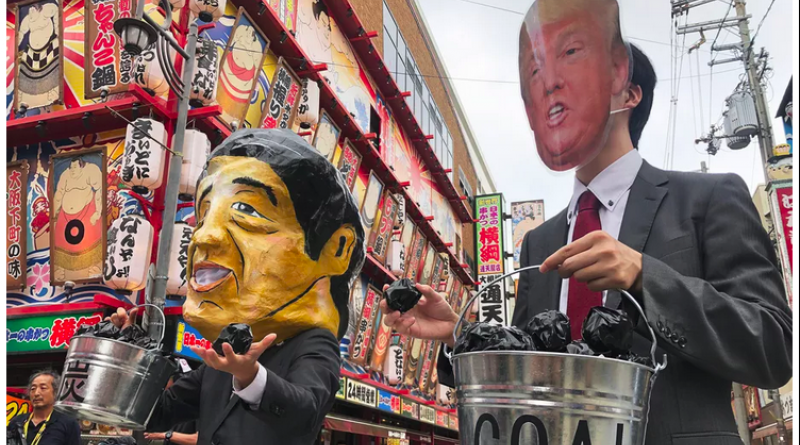 Japan is pushing ahead with a fuel source that’s exacerbating climate change.

Japan, the world’s third-largest economy, is leaning into coal power, a striking move at a time when the climate crisis is accelerating and most of its economic peers are cutting back on the high-polluting energy source.

The prospect of more coal has been looming for years: In 2018, Japan proposed adding 36 new coal plants to its fleet. Earlier this month, the New York Times reported that Japan has revised that plan but is still on track to add a total of 22 coal-fired power plants at 17 sites in the next five years. Some 15 of these plants are already under construction.

If all 22 plants were to come to fruition, Japan will install enough new coal power capacity to emit an additional 74.7 million metric tons of carbon dioxide each year, more than the total emissions of countries like Norway and Sweden.

This coal buildout would make Japan, the world’s fifth-largest greenhouse gas emitter, the only G7 country building more coal power plants domestically and the largest G7 financier of coal generation in other countries.

Under the Paris climate agreement, Japan committed to cutting its emissions 26 percent below 2013 levels by 2030, a target activists already considered to be weak. Last year, Japan’s cabinet also adopted an emissions reduction strategy that would make the country carbon neutral after 2050. But if the 22 new coal plants get up and running, Japan could blow past its 2030 target and move further off track from its 2050 target.

“Coal is the biggest source of Japan’s CO2 emissions,” said Kimiko Hirata, international director of the Kiko Network, a Japanese environmental advocacy group. “Building new coal is a clear contradiction to the Paris agreement that Japan is aligned with.”

It’s also awkward for organizers of the 2020 Olympic Games in Tokyo, who are claiming to “build the foundation of decarbonisation” with extensive renewable energy, hydrogen-powered vehicles, and carbon offsets.

But the move shows that despite this government’s purported concern about the climate, there are more powerful political and economic forces — and players — driving Japan’s energy policy, often against the will of many Japanese citizens. As a resource-poor island country, Japan relies on imports for more than 90 percent of its energy, so the government is concerned with securing reliable sources of fuel. Coal that Japan buys from regional allies gives some parts of the government peace of mind.

Coal power is also a pillar of Japan’s export strategy. Its banks finance Japanese-designed and -built power plants around the world.

So despite experiencing its own impacts of climate change, from rising sea levels to deadlier extreme heat, Japan is pushing ahead with a fuel source that is exacerbating the problem.

Japan is still recovering from the Fukushima Daiichi nuclear disaster

To understand why Japan would turn to coal at this critical moment in history, we have to go back to 2011, when a magnitude 9 earthquake triggered a massive tsunami that towered more than 20 feet high and struck parts of Japan’s Pacific coast.

The reactors at the Fukushima Daiichi nuclear power plant automatically shut down in response to the earthquake, but the tsunami overtopped the plant’s seawall, stalling the backup generators that were providing vital cooling to the idled reactors. The lost coolant led to meltdowns and explosions at the plant, releasing dangerous radioactive material.

In response, more than 150,000 people were evacuated from the region. While there were some increases in ambient radiation exposure, the main harms from the disaster stemmed from relocating so many people, ranging from worsened illnesses from loss of access to health care to mental health problems like post-traumatic stress disorder.

Meanwhile, Japan’s entire nuclear power fleet, providing one-third of the country’s electricity, was taken offline for safety inspections and updates. Before the disaster, Japan was looking to ramp up its share of nuclear energy to 53 percent.

The impacts of the disaster rippled out other countries too. Germany was also preparing to build more nuclear power plants before the 2011 earthquake. After the Fukushima disaster, Germany pulled a 180 and decided to embark on ending its use of nuclear power entirely.

Nine years later, the impacts of the earthquake continue to rock Japan. The country has or will decommission 24 reactors, 40 percent of its total. Of the remaining reactors, fewer than half have been restarted. Nuclear’s share of electricity generation has now fallen to 3 percent, with fossil fuels largely filling the void.

It’s worth noting that Japan’s coal consumption was increasing prior to the Fukushima disaster, but the earthquake, tsunami, and meltdown accelerated its rise. While Japan has been deploying more renewable energy — it was 17.4 percent of the energy mix in 2018 — more than half of Japan’s electricity comes from coal and natural gas

The government publicly proclaims its concerns about the environment and its green bona fides, but Japan’s powerful Ministry of Economy, Trade, and Industry (METI) is a key player in decisions about the country’s energy, and it prioritizes reliable and cheap power over low emissions. Japanese Prime Minister Abe Shinzo has also leveraged the ministry to advance his agenda to boost Japan’s economic growth, directly intervening in sectors like energy.

METI has long complained that Japan pays some of the highest energy costs in the world and has been searching for a reliable and low-cost source of electricity.

That’s because Japan depends on exports and still has a lot of heavy industry that’s facing stiffer competition from competitors like China. Those high energy prices increase the prices of Japan’s exports. Add to that slowing economic growth and debt that is more than double Japan’s total economic output, and you have a government facing crushing pressure to lower costs and increase business.

Right now, parts of Japan are betting heavily on renewable energy. Fukushima prefecture, where the Fukushima Daiichi nuclear plant is located, is trying to distance itself from nuclear, aiming to be powered 100 percent by renewables by 2040. Renewables currently provide 40 percent of the prefecture’s electricity.

But across Japan as a whole, solar, wind, geothermal, and hydropower generation provide just 17 percent of the country’s electricity. As a densely populated island country, Japan has run into land use constraints around deploying large-scale wind and solar plants. Power market rules have also kept solar and wind prices high in Japan, though METI has recently taken steps to relax these regulations to help lower clean energy costs.

Over the long term, the government remains skeptical that renewables can meet Japan’s economic and climate goals at the same time.

“The current situation is that for renewable energy with fluctuating output such as solar power and wind power, etc. adjustments using demand control, pumping, thermal power, etc. are necessary, and complete decarbonization is difficult using these methods alone,” according to METI’s 2018 strategic energy plan. “They become more useful when combined with electricity storage and hydrogen, but there are the issues of the increase compared to overseas of the power generation cost and the power grid constraints, etc.”

That pretty much leaves nuclear as Japan’s remaining option for carbon-free electricity. But the public is resolutely against it. “Nuclear has a pretty bad reputation in Japan,” said Scott Harold, a senior political scientist at the RAND Corporation.

With nuclear largely off the table and skepticism around renewables, Japanese officials have increasingly turned to natural gas and coal, over the objections of environmentalists and locals in many of the communities where new plants are planned.

Environmental activists see this as a decision motivated more by saving money than trying to improve energy reliability. “It is true that renewable is still more expensive than coal, and coal is one of the cheapest options in Japan, but it is also true that without building new coal power, we have no problem in electricity supply in Japan regardless [of the] nuclear shutdown,” said Hirata. In fact, some coal power projects were canceled due to lack of energy demand, as well as pressure from customers to use cleaner energy and tougher environmental regulations.

The rise of China threatens Japan, and so it wants to use coal to solidify and expand its influence

Behind India and China, Japan is the world’s third-largest coal importer. About two-thirds of Japan’s coal is from Australia, a country that is also facing climate-linked disasters and is struggling to curb its economic reliance on coal.

But Japan is also a major exporter of coal technology, and its government has used these power plants as a means to exert soft power. Through government institutions like the Japan Bank for International Cooperation, the government has financed new coal power plants in countries like Vietnam, Indonesia, and Bangladesh.

Japan’s government has argued that these coal plants use ultra-supercritical boilers that are vastly more energy-efficient and pollute less per unit of energy. But these plants still emit greenhouse gases and are a nonstarter for activists who want the world to zero out carbon emissions.

At the same time, China is financing coal plants in many of these same countries. China is using coal power financing as a key element of its Belt and Road Initiative to expand its economic and political influence throughout Asia and Africa. Both Japan and China are now racing to secure lucrative construction contracts in developing countries to expand their strategic reach.

Meanwhile, Japan has a rising rivalry with another growing regional power, South Korea. Seoul has made nuclear power a key plant of its export strategy and is also targeting many of the same markets as Japan, like Vietnam, Indonesia, and Thailand.

However, Japan’s coal exports are eroding its international standing. At the December United Nations climate meeting in Madrid, Japanese Environment Minister Shinjiro Koizumi received a frosty reception as Japan arrived with no new commitments to curb its emissions and no indication that it would curb its financing of coal plants in other countries.

Protestors in Pikachu costumes gathered at the venue to protest Japan’s ongoing financial support for coal power in developing countries. UN Secretary General António Guterres called for the world to break its “addiction to coal,” which Koizumi saw as a pointed message to Japan.

“Of course I am aware of global criticism, including on our coal-related policies,” Koizumi told the conference. “A growing number of people in Japan, including myself, believe further climate actions must be taken.”

The question now is what Japan will bring to the table later this year in Glasgow at the COP26 meeting, where countries that are party to the Paris agreement are expected to bring more aggressive commitments to reduce their emissions. Japan could shelve some of the coal plants it has on the drawing board or divest its public banks from fossil fuels. But that’s unlikely to happen under the current government.

And if Japan shows up empty-handed again, it could sap other nations’ enthusiasm to step up their ambitions.